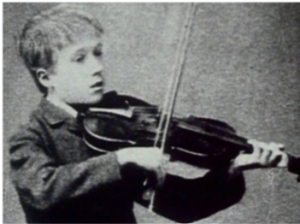 To celebrate the birthday of Cheltenham’s greatest son, Cheltenham Playhouse and Film Cheltenham are showing Holst – In The Bleak Midwinter, on 21st September 2021. This wonderful documentary is the first and only full-length film made about the composer. Its director, Tony Palmer, is coming from London. You may have seen Gustav Holst on the zodiac fountain in Imperial Gardens, conducting with his left hand, though he was right-handed. You may know ‘Mars’, the
noisiest of The Planets. Or ‘Jupiter’, whose big tune he lent to ‘I Vow To Thee My Country’ (1921), chosen by Princess Diana for her wedding and heard at Prince Philip’s funeral, and ‘World In Union’ (2011), the global anthem of Rugby Union, available in innumerable languages. But there is a lot more to Holst than that. Born in 1874 in Pittville Terrace, he was asthmatic, short-sighted (no-one noticed) and had neuritis in his right arm, leading to virtual paralysis (hence the left-hand conducting). He lost his Mum at seven; his step-mother ignored him in favour of a religious cult that believed in reincarnation and the unity of all religions. His father, organist at All Saint’s Church, taught him piano and tried to teach him violin, but gave him a trombone to strengthen his lungs. At Cheltenham Grammar, he was called ‘Sausage’, because he couldn’t play sport and had a German-sounding surname: the family had been in Britain since 1802. Left alone for long periods, he began writing little songs, symphonies and mini- operas, despite knowing nothing about musical theory.

At 17, he became choir master at Wyck Rissington, near Bourton-on-the-Water, walking around the Cotswolds to teach singing to adults and children. At 18, his Dad borrowed £100 to send him to London. There he met Ralph Vaughan Williams, born in Down Ampney, and began exploring orchestration, conducting, vegetarianism, teetotalism, William Morris, English folk song, Tudor music, Hindu scripture, Sanskrit, the poetry of Walt Whitman, astrology, Christian socialism,
Irish republicanism, music hall, sound recording, life, death and the universe. Always broke, he composed in his spare time. The rest of the time he taught: musical outcasts, which meant women and schoolgirls; country folk; factory workers; demobbed soldiers in Salonica; jazz musicians in America; brass bandsmen; people with missing limbs and broken instruments; the poor; anyone prepared to work hard. He died, aged 59, in May 1934, three months after Elgar and a month before Delius. The London newspapers said he could have been one of the ‘Great British Composers’ if he hadn’t worn himself out teaching kids and amateurs. But that’s  we love him.

Tony Palmer was born in 1941, became a BBC trainee, and went on to make more than 100 films with and about such luminaries as The Beatles, Jimi Hendrix, Igor Stravinsky, Maria Callas, Frank Zappa, Liberace, Peter Sellers, Le Corbusier, Carl Orff, Bobby Moore, Wagner, NASA, The Wigan Casino and Fairport Convention.